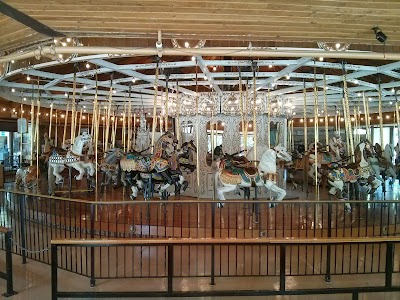 The Riverfront Park Carousel, also known as the Looff Carousel and the Natatorium Park Carousel is a carousel in Spokane, Washington originally built in 1909 by Charles I. D. Looff. The carousel was a gift for Looff’s daughter Emma Vogel and her husband Louis Vogel, who owned Natatorium Park in Spokane.[1] It remained at the park until 1968 when the park closed. The carousel was relocated to its present location at Riverfront Park in 1975 where it continues to operate.[2][3]

The carousel still contains its original 1900 Ruth & Sohn Band Organ, although due to deteriorating player rolls, a digitized recording is played during the carousel’s operation.[3] The organ was manufactured in Waldkirch, Germany and imported by Looff around 1900.

The carousel contains 54 horses, 1 giraffe, 1 tiger and 2 chariots, all hand carved by Looff himself. It also has a brass ring dispenser that allows the outside riders to grab a ring during each pass and then toss the ring at a clown with a hole for his mouth. If the rider is successful in capturing the brass ring, he or she can turn it in to win a free ride on the carousel.[4]
(Source: Wikipedia)

Linda is a retired Realtor/Instructor in the state of Washington. The love of community and people has opened the door to seeing her surroundings with a freshness not shared by everyone. Hopefully, this collection of everyday places, events and people will bring joy to others! Her husband, Everett will participate in the "hunt" for just the right captured moment in the beautiful Northwest.
View all posts by Linda Miller Sheets →
This entry was posted in Fun Activities and tagged carousel, looff, spokane. Bookmark the permalink.